Moscow Demographic Summit to be Held at Russian State Social University, Once Home of Communist International 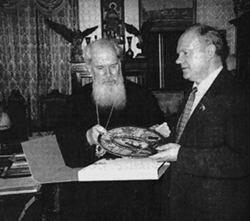 Jacobs noted the historic significance of the Summit's location: "It is now the home of RSSU, one of Russia's largest public universities with over 100,000 students and Russia's chief institution for educating social workers; But in the Soviet-era, it was the home of the Comintern, and then later, after WWII, the Marxism-Leninism Institute."  The Communist International (Comintern), also known as the Third International, was a communist organization founded in 1919 that existed to fight "by all available means, including armed force, for the overthrow of the international bourgeoisie" and the establishment of communism worldwide.

Jacobs noted the irony: "This building, once dedicated to the abolition of the family as a bourgeoisie institution, will be the site of a Summit dedicated to revitalizing the natural family and reversing the disastrous worldwide decline of birthrates." Russia, which is losing an estimated 700,000 people annually, is ground zero for what's called Demographic Winter.

The Summit will include discussions of: The Demographic Potential of Russia, The Importance of Pro-Family Public Policy in Russia and the West, Demographic Indicators of Developed and Developing Nations, The Crisis of Family and Marriage, Abortion, Contraception and Population Control, Influence of Demographics on Economic Processes, Human Capital and Family-Friendly Business Practices, Population Aging and Ways to Overcome Demographic Challenges.

The Summit will be the first international conference to deal with the coming crisis occasioned by the worldwide decline of fertility. Speakers will include members of the legislature of the Russian Federation, representatives of the Russian Orthodox Church, leaders of other churches and denominations, demographers, scholars, authors, activists and leaders of the World Congress of Families and its Partners.

Jacobs observed: "Demographic Winter has been a special concern of the World Congress of Families going back to WCF II in Geneva in 1999." Congresses in Warsaw (2007) and Amsterdam (2009) included plenary speeches and panels on declining birth rates -- its causes, consequences and possible cures. WCF leaders and experts were interviewed in the documentaries Demographic Winter: The Decline of The Human Family and Demographic Bomb: Demography is Destiny.

WCF Communications Director, Don Feder, was also director of communications and public spokesman for both documentaries (www.demographicwinter.com).
"We are honored to be part of this crucial undertaking." Jacobs said. "The Summit Chairman is Alexey Komov, head of the World Congress of Families

Representative Office in Russia and the CIS.  We're especially grateful for the support of the Russian State Social University and Rector Vasily I. Zhukov."
Click here for the English and Russian website of the World Congress of Families Moscow Demographic Summit: Family and the Future of Humankind.

The World Congress of Families (WCF) is an international network of pro-family organizations, scholars, leaders and people of goodwill from more than 60  countries that seek to restore the natural family as the fundamental social unit and the 'seedbed' of civil society (as found in the UN Universal Declaration of Human Rights, 1948).  The WCF was founded in 1997 by Allan Carlson and is a project of The Howard Center for Family, Religion & Society in Rockford, Illinois.  To date, there have been five World Congresses of Families -- Prague (1997), Geneva (1999), Mexico City (2004) and Warsaw, Poland (2007).  World Congress of Families V was held in Amsterdam, Netherlands, August 10-12, 2009 (www.worldcongress.org).
Posted by Boris Denisov at 8:08 AM