Religious Liberty in the US on Its Way Out? 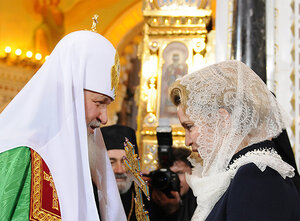 Once I wrote a letter to John Flynn, but he did not respond. Recall Byeloborodov avoidance of discussion at Radio Liberty.
It seems, JF is in charge of The Holy See counter propaganda in RSHR area.
enjoy:

Writing in the On the Square section of the Web site of the magazine First Things, his Oct. 25 piece noted that both courts and government agencies are increasingly overriding conscience rights when other rights or liberties are considered to be more important.
Bishop Gomez cited the denial a week before of a grant request made by the U.S. bishops' Migration and Refugee Services agency [btw Russian Orthodox Church does not believe to Rosstat and wishes to have her own migration statistics]. The agency has received funding for a number of years, in order to help the victims of human trafficking.

Not long ago the government requested the agency to provide abortions, contraception and sterilization services [:)] for the women in their care. Bishop Gomez said he hoped the grant application was not denied because the agency refused to provide such services.
This and many other similar cases motivated the United States bishops to set up a committee for religious liberty.

Announcing the move last Sept. 30, the president of the United States Conference of Catholic Bishops (USCCB), Archbishop Timothy Dolan, explained that religious freedom "in its many and varied applications for Christians and people of faith, is now increasingly and in unprecedented ways under assault in America."

In his letter, dated Sept. 29, Archbishop Dolan listed six major problems regarding religious liberty in the period since June.


Concern over the present federal administration's position on conscience rights has been building for some time.

Earlier this year a 2008 rule that granted conscience protection to health care providers who opposed participating in abortion and sterilization was mostly rescinded [and Russia is doing the opposite].

Sister Carol Keehan, president of the Catholic Health Association, told the New York Times in a Feb. 28 article that in recent years "we have seen a variety of efforts to force Catholic and other health care providers to perform or refer for abortions and sterilizations."
In past months representatives of the Catholic Church have made repeated appeals to federal legislators on the topic of religious freedom.

Cardinal Daniel DiNardo, chairman of the USCCB Committee on Pro-Life Activities, wrote to members of Congress on the issue of the new HHS rules regarding private health insurers. His July 22 letter decried the failure to adequately allow freedom of conscience based on religious beliefs.

An omission, he added, all the more notable given that the regulations allow people the right of objection if they wish to cure illness solely by prayer or for those on Indian reservations who prefer to use traditional tribal healing practices.

On Aug. 31 the Office of Counsel of the USCCB submitted a final statement to the HHS regarding the rule changes. Contraceptives, it pointed out, don't cure any health problem; rather they disrupt the normal functioning of the reproductive system, while also introducing health risks.

On the matter of conscience objection the submission said that the only ones protected are a small subset of religious employers, with no protection for individuals or insurers.
"The exemption is narrower than any conscience clause ever enacted in federal law, and narrower than the vast majority of religious exemptions from state contraceptive mandates," the statement declared.

The changes will violate the religion and free speech clauses of the First Amendment of the Constitution and amounts to a specific targeting of Catholics by not allowing them to follow their consciences, the statement added.

Effectively, what will happen is that church organizations will be forbidden to practice what they preach. Such action is "an unprecedented intrusion by the federal government into the precincts of religion that, if unchecked here, will support ever more expansive and corrosive intrusions in the future," the submission warned.

Most recently, Cardinal DiNardo returned to the fray, with a Nov. 1 letter to a Congress committee. Referring to health care reforms in general and not just the controversy over the HHS rules, he urged that any changes to the laws on health care "must not become a vehicle for abandoning or weakening longstanding federal policies that respect unborn human life [a new concept?] and rights of conscience." He lamented the fact that "a failure to respect conscience rights poses a serious threat to the goal we share of expanding access to health care."

Problems aren't limited to health care. Earlier this year Illinois's Department of Children and Family Services told the state's four Catholic dioceses that it would not renew their contracts for foster care and adoption services because they were not prepared to include same-sex couples among their clients. The changed situation is a result of the ironically-named Illinois Religious Freedom Protection and Civil Union Act, that came into force on July 1. The new law legalized civil unions for homosexual couples without protecting religious organizations, the Chicago Tribune reported, July 5.

In a later development Catholic organizations in the dioceses of Joliet, Springfield, and Belleville, have requested that a state appellate court halt the transition of their foster care cases to other agencies, the Chicago Tribune reported Oct. 7. They have also appealed to the court to examine the state's decision to terminate the foster care contracts with the Catholic agencies, saying that this violates their religious freedom. The court refused, however, to stay the handover of the cases. In an Oct. 27 statement Bishop Thomas John Paprocki of Springfield criticized the state government's exclusion of Catholic agencies. He said that it has created an unnecessary crisis for the children and families who could have been helped.

The court has still to rule on the merits of the case regarding religious freedom.
Pressure on the Catholic Church is not confined to state actions. The Washington, D.C., Office of Human Rights is now investigating a complaint that the city's Catholic University of America is violating the human rights of Muslim students. In his complaint John Banzhaf, a law professor at George Washington University Law School, alleged that by not providing them with rooms without Christian symbols the university is offending Muslim students.

John Garvey, president of the university, said in a statement issued Oct. 28 that the charges are completely without foundation. In fact, no Muslim student at Catholic University has registered a complaint about being able to practice their religion on campus, he said. Moreover, Banzhaf himself admitted that he has not received any complaints.

It seems that in an increasingly secularized society tolerance is to be extended to all, except churches and believers who want to live by their beliefs.

The txt arrived with my Vatican subscription, likely you could find it on zenit.org
Posted by Boris Denisov at 10:15 AM

Email ThisBlogThis!Share to TwitterShare to FacebookShare to Pinterest
Labels: Vatican