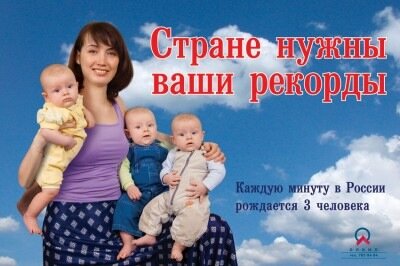 Staunton, March 29 – Reports that North Caucasus officials have “lost” more than 110,000 children they claimed in 2010 were residents of their republics are part of a broader problem in which officials there and elsewhere falsified census reports in order to suggest that the Russian Federation has “at a minimum” 2.5 million more people than it in fact does.

That is just one disturbing conclusions about the results reported by the 2002 and 2010 Russian censuses which Sergey Zakharov, the director of demographic research at Moscow’s Higher School of Economics, offered in the course of an interview posted online yesterday.

Because Russia, like many other countries, does not have a population register as such, Rosstat relies “above all” on data about “demographic events” like births, deaths, and marriages, and on censuses which the constitution requires be conducted every ten years, Zakharov notes. Unfortunately, there are many problems with such data, especially that from censuses.

“It is difficult to call the 2002 and 2010 censuses good,” the demographer continues, adding that he would give them a grade of  “C-Plus.” Among the worse problems manifested in them, he says, are the efforts by officials to report that their regions and republics have more residents than in fact they do in order to obtain larger subventions from Moscow.

Among the worst offenders in this regard are leaders in the North Caucasus, a fact that has been highlighted by official discovery that those leaders have somehow misplaced tens of thousands of children they claimed in 2010. But that region is far from the only one where official malfeasance boosted the overall numbers.

That region, Zakharov says, added one million to the real number, but it was closely followed by over-reporting in Moscow and St. Petersburg.  In those cities, many people refused to “open their doors” to census takers and the original count was quite low.  Then-Moscow Mayor Yuri Luzhkov gave an order to use information contained in administrative registrars.

As a result, “many people were double counted” in the census, first by their census declarations and then by these alternative sources.  In 2002, this happened but it was illegal, Zakharov continues, but for 2010, “Rosstat completely legalized” that approach. “Otherwise, it simply couldn’t overcome the lack of willingness of the population to cooperate.”

Rosstat says that only 15 percent of the reported count in 2010 reflected the use of such alternative enumerations, “but we consider that the real figure is much greater.”

No country has ever conducted a perfect census, Zakharov says, but Russia’s problems with the collection of data mean that officials cannot come up with good policies except by accident because they do not have data about the population on which they can rely.  And both officials and demographers are aware of this.

One way to address it, he continues, is to conduct mini-censuses between those that embrace the entire country. The Soviet Union conducted one of these in 1985, and the Russian Federation plans to do one before the 2020 enumeration, focusing in particular on issues involving reproduction rates.

“The number of people born is increasing” in Russia, Zakharov says. “But whether this means an increase in the birthrate is a big question because it is no secret that Russia is at crest of a demographic wave,” in which the large generation of Russian women born in the 1980s is having children.

Indeed, it seems likely that “the average number” of children per woman “is not changing although the absolute number of births is increasing” because there are more Russian women now in the prime childbearing years of their lives.  When their number declines as it will, Zakharov says, so too will the number of births.

The Russian government’s pro-natalist policies, including “maternal capital,” are unlikely to change that, the demographer says. They may change when women have children but not how many.  To affect the overall number, he says, requires first of all “a struggle with poverty” and even a return to a more rural lifestyle, something which is unlikely to occur.

Consequently, expecting as some Russian officials do that they make the three-child family the norm or even more common is “completely utopian,” as the numbers show and as international experience confirms.
Posted by Boris Denisov at 1:04 PM