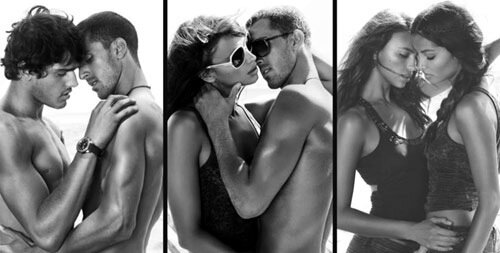 The number of visits by gay men to health clinics dropped significantly after same-sex unions were allowed in the state Massachusetts.
This was regardless of whether the men were in a stable relationship, reported the American Journal of Public Health.
A UK HIV charity said there was a clear link between happiness and health.
Research has already suggested that gay men are more likely to suffer from depression and suicidal thoughts than heterosexual men, and that social exclusion may be partly responsible.
Same-sex marriages are legal in six US states, with Massachusetts the first to allow them in 2003.
Researchers from Columbia University Mailman School of Public Health surveyed the demand for medical and mental health care from 1,211 gay men registered with a particular health clinic in the 12 months prior to the change, and the 12 months afterwards.
They found a 13% drop in healthcare visits after the law was enacted.
There was a reduction in blood pressure problems, depression and "adjustment disorders", which the authors claimed could be the result of reduced stress.
Lesbian women were not included in the study as there were insufficient numbers to give a statistically meaningful result.
Dr Mark Hatzenbuehler, who led the study, said: "Our results suggest that removing these barriers improves the health of gay and bisexual men
"Marriage equality may produce broad public health benefits by reducing the occurrence of stress-related health conditions."
A spokesman for the Terrence Higgins Trust, a UK-based sexual health and HIV charity, said: "There is a known link between health and happiness.
"It's no surprise that people who are treated as second class citizens tend to have low self esteem, which in turn makes them more likely to take risks.
"Whether this is drugs, alcohol abuse, or unsafe sex, treating gay men unequally has lasting repercussions for their health."
Source: BBC News Online, 16 December 2011
Posted by Boris Denisov at 2:32 PM