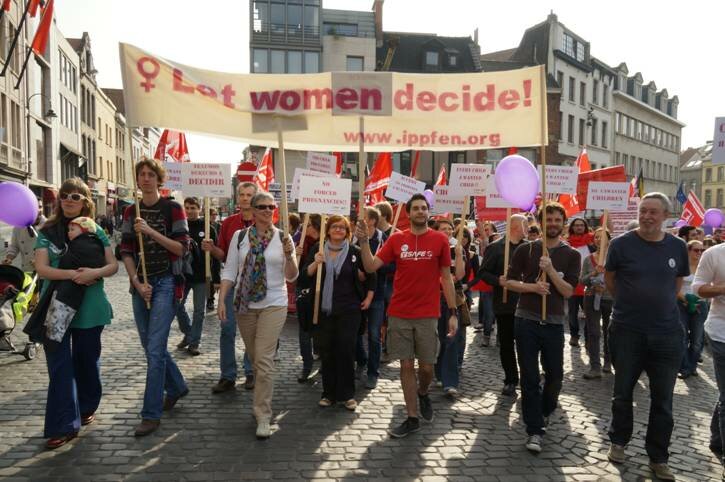 Brussels 24 March 2012: Some 50 staff and friends of the International Planned Parenthood Federation European Network joined over 2200 other pro-choice activists in a European rally to protect abortion rights in Europe. This event was followed the very next day by a March for Life that gathered some 1900 anti-choice people.

Since the 30th anniversary celebrations of the Belgian abortion law which took place in 2010, anti-choice activists have been gathering each year in Brussels for a so called “March for Life”. Judging from the many participants and speakers from other European countries who joined this March, and the way similar Marches for Life are taking place in other European countries, it is pretty clear that this is an initiative led by a highly organized international network of anti-choice activists whose sole objective is to ban abortion throughout Europe and impose their religious convictions on all women.

Over the course of the last two years there has been growing opposition in various European countries such as Spain, Italy, Hungary, United Kingdom and Switzerland, resulting in various harmful acts of intimidation and attempts to revise abortion legislation. Religious beliefs combined with financial restrictions have also lead certain countries to reduce financial support for abortion services, therefore affecting the access of women and especially poor women to abortion.

IPPF EN firmly believes that sexual and reproductive health and rights should be respected, including that of a women’s right to abortion and access to affordable high-quality contraception. Therefore IPPF EN congratulates the organizers of the Abortion R!GHT event and the nearly 8,000 people who signed the Charter of the Platform for Abortion Rights.

“It was great to be so many at the pro-choice manifestation”, says Vicky Claeys, Regional Director of IPPF European Network. “However, it is extremely sad when having been on the barricades throughout the 80ties for a liberalisation of the Belgian abortion law, to have to do this again. That really hurts and is certainly something I did not expect to happen at that time.”
Posted by Boris Denisov at 6:29 PM