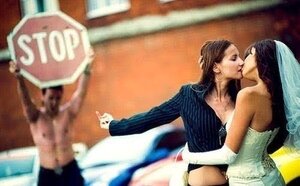 A government official in Moscow on Wednesday demanded access to a Russian baby who he claims was adopted by a "freaky" American family, according toRussian media sources.
Russian officials are claiming they have a right to protect the Russian-born child who they say was adopted by a couple of lesbians in the United States, a senior official said Wednesday.
"This is another immoral trick of the Americans. Two lesbians cheated a Russian court in 2007 to adopt a Russian child," announced Konstantin Dolgov, Russia's so-called foreign envoy for human rights and supremacy of law.
Russian officials claim that the two lesbians were divorced in 2009 after adopting the child, whose name and age are being withheld. Right after the divorce, the two female parents files lawsuits against one another requesting a judge to give each opponent exclusive custody rights for the adopted child.
"This refers to psychological trauma inflicted on the child in this freaky family," Dolgov said.
The Russian officials are urging U.S. authorities to intercede on their behalf and to take the child into protective custody and allow Russian diplomats already on assignment in the U.S. to visit and examine the child.
In a controversial move around the 2012 Christmas holiday, Russia's legislature, with the prodding of President Vladimir Putin, passed a law in that bans adoption of Russian children by Americans. The law went into effect on Jan. 1, 2013.
President Putin said that Russian orphans should be adopted in their homeland. However, advocates for gay and lesbian adoptions claim Putin and the Russian leaders are homophobes who wish to deprive certain Americans the same rights enjoyed by heterosexuals.
Source=examiner.com

Posted by Boris Denisov at 9:14 AM